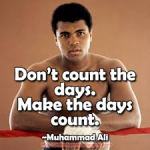 If you did not live during the formidable years of Ali’s reign, you indeed missed an experience to see a legend that was unapologetic and lived by saying what he meant and meaning what he said.

He was incomparable and we could not wait to see what would come out of his mouth next. He was confident, fearless and in no way hesitant to tell it like it was, much to the dismay of interviewers and opponents of his straightforward, in your face approach.  He voiced his beliefs and stood by them, even to the point of losing his title for standing up for what he believed in.  But stood, he did!  He did not cower.  He did not apologize.  Just as he stood tall in the ring, he stood tall in life.

Even though he just passed, the essence of Ali has dimmed over the years due to the ravaging that Parkinson’s had taken on his body. It took away his voice and it took away his vitality. But who he was remained inside.  The world no longer saw, but those closest to him did.  So we mourn him today as we remember his life.

His presence in the ring as well as out of the ring captured the world and held it riveted as few others have been able to do over the years. He made us smile. He made us laugh and he made us proud.

I always appreciated his candor, his truth and his refusal to sugar coat his words to make you feel comfortable.  Heck, sometimes even I cringed for the interviewer who asked the really dumb questions and could not get a word in when Ali would let it rip.  I just wanted to say to the interviewer, “What are you thinking?”  LOL!

As we go through this week of mourning, many pieces of who he was will be shown on the news, in newspapers and documentaries via TV.  I encourage all young people to take a moment to learn who this legend was. And as you do, check out some of his memorable quotes and learn from his wisdom.

One particular quote that has spoken to me of late is “Don’t count the days; make the days count.” When I look back over life, I realize I have always been a counter; one who judges completion by arriving at a timely destination. I counted how many days were left in the school year. I counted how many days until vacation. I counted…I counted…I counted! Not fully understanding that my focus was off. Since retiring, I have learned that what my days consist of, what I accomplish is the true joy. It is not arriving at a spot in time. In fact, there are some days, I am not even cognizant of what day of the week it is, without stopping to think for a minute. I have grown to love living a life of making the days count.

So thank you Champ! For your wisdom…for your inspiration….for your impact you have left with us. You will always be “the greatest”!