When I look back over the years, I have to say I am so glad I grew up in the 50’s and 60’s. Actually the 60’s is when I became aware of so many things. I really, truly began to understand that being black was not a walk in the park. However, it is a walk I would not change for all the money in the world.

I saw the Jim Crow signs while visiting the South and felt the hate that being black could evoke just by the mere fact of coexisting with whites. In 1959, our family became the 2nd black family in our neighborhood. And I tell you, white flight occurred at warp speed. Our neighbors could not wait to get away from us because we had the audacity to share residence on the same street. We had the audacity to want to live a good and peaceful life and to live as a family in a good neighborhood.

I vividly remember traveling to Tennessee on family trips and seeing the “Whites only” and “Colored Only” signs and being told by my mom to never look a white person in the eye and to always answer “Yes ma’m or No ma’m”. That still leaves a vile taste in my mouth, these many years later because I felt it was undeserving for them to be acknowledged in that way. I remember the first time we stayed in a hotel in Jackson, Tennessee around the early 70‘s and my grandmother asking as we were walking to our room, “Are they really going to let us stay here?” I got tears of anger in my eyes because I dared anyone to tell me we couldn’t. I really truly think I would have been arrested if anyone had tried to stop me. That was the rage that was building within me then and that is the rage I wrestle with today when anyone tries to deny me my human rights. If it had not been for the Lord and trying to balance this rage and me trying to be obedient to the Holy Spirit when it says, “Be still”, there truly would have been a trail of bodies behind me and probably a long list of incarcerations in my past. I am not proud of saying that , but there it is!

I remember watching the marches on TV led by Dr. King and watching in horror, the water hoses turned on peaceful protestors and often times children and seeing dogs attack people running away. I couldn’t understand it then, and even now as an adult I do not understand the type of privilege one feels they must own to treat another human being like that for no other reason than pure hate and entitlement.

I was so proud of Dr. King and I followed him diligently and often asked my father why we couldn’t march. But at times I would get upset with Dr. King, because I would get angry seeing the water hoses and the dogs and I would want him to fight back. I would get tired of hearing him talk about waiting. I wanted change right then. So I would start listening to some of the things Malcolm X was saying like bringing about change by any means necessary. Then Malcolm’s rhetoric would sometimes frighten me and I would be drawn back by Dr. King’s theme of love and perseverance. When Dr. King spoke, I would be mesmerized by his voice, by his words and by his powerful ability to evoke pride within me and a desire for a better world.

When Dr. King died in 1968, a piece of me became broken and many say you can kill the dreamer but you cannot kill the dream. Well when you look around in today’s world, the dream has been set aside by a lot. Yet, as with God’s purpose and plan for accomplishing his will, there is always a remnant. And we who were around and who believe in the dream, must continue to work diligently to accomplish the goals that Dr. King set forth. His message of love and treating everyone right is in dire need today of being promoted.  The dream does not have to die with the dreamer.  An effective leader empowers his followers.  And I do believe, Dr. King was effective, intentional and empowering. 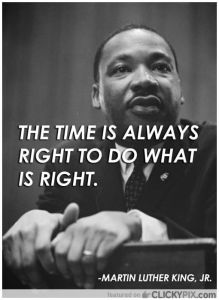 I feel sorry for today’s young people who did not experience it or even for the people who grew up in my time period who missed the passion of the movement, because it did not affect them directly or they just were not interested. We need a leader today. We need a drum major for justice. Many have tried but have fallen short. We need Dr. King’s words to be applied to our lives today. I challenge you to go back and listen to his speeches, all of them, not just the “I have a Dream” speech. His “Letter from the Birmingham Jail” is powerful and passionate. Look at some of his quotes and then start living your life based on the powerful words he spoke.

I am sure we will have only one Dr. King in our lifetime. Yet, his words are as relevant today as they were in the 60’s. I guarantee, if you pay attention and embed them within you,  they will change you and thereby change the world around you.  So while we continue to go about our daily lives, start working on your corner of the world in a way deserving of the leadership he exhibited.